A large delegation from the West Hills Neighborhood Council attended a gathering in City Hall on Jan. 14 to recognize community leaders and partners engaged in the City of Los Angeles’ Clean Streets Initiative. During the meeting in the chambers of the city's Board of Public Works, Mayor Eric Garcetti honored Reeyan Raynes, co-chair of the West Hills Neighborhood Council's Beautification Committee, as one of three outstanding youths who have enlisted other young people, as well as adults, to participate in local beautification projects. In addition, the West Hills Neighborhood Council received a $1,500 grant recognizing its outstanding participation in the Clean Streets Challenge. The West Hills delegation was joined by Pastor Brian Morehead of the The Church at Rocky Peak, which has sent several hundred volunteers in recent years to assist in annual cleanup projects in our community. "Our success would not have been possible without our incredible partners from the Canoga Park-West Hills Chamber of Commerce, Key Club, the Church at Rocky Peak and local residents who contributed in making West Hills a model community for the rest of the city," said Raynes, who co-chairs the Beautification Committee with fellow WHNC Board Member Tony Brosamle. For information about the committee's monthly Community Cleanups and other initiatives, or to recommend a location, visit www.westhillsnc.org/beautification-committee.php. (Photo Credits: Daniel Brin) 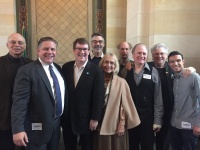 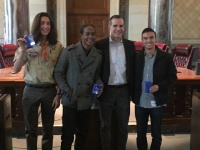 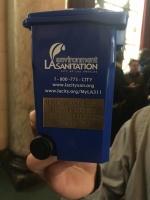 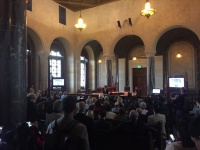 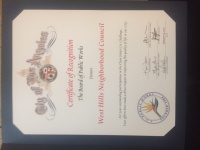